See Which NJ Representatives Supported Save Our Stages!

See Which NJ Representatives Supported Save Our Stages! 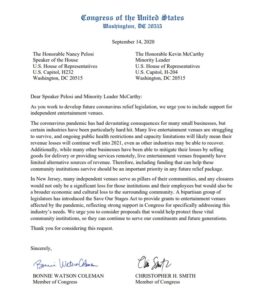 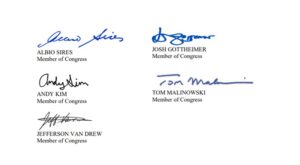 We sent out a red alert that indie venues are in crisis and these Representatives heard us! They responded right away and wrote a bi-partisan delegation letter to House leadership, Speaker Pilosi and Minority Leader McCarthy, urging support for SOS.

Since the Save Our Stages Act (S. 4258, H.R. 7481) was introduced in July, bipartisan Congressional support has continued to grow – 147 Senators and Representatives to date – even through the August Recess. The SOS legislation is aimed at providing relief to independent live venues, promoters and festivals across the nation that, like Hopewell Theater, have been shuttered with no revenue and high overhead since March with no timeline for reopening. When asked if the shutdown were to last six months or longer with no meaningful federal assistance, 90% of The National Independent Venue Association (NIVA) members said they would be forced to fold forever.

Introduced in the Senate by Senators John Cornyn (R-TX) and Amy Klobuchar (D-MN) and in the House by Representatives Peter Welch (D-VT) and Roger Williams (R-TX-25), the Save Our Stages Act provides vital support for independent live music venues that have lost nearly 100% of their revenue since the pandemic began in March, yet have enormous fixed overhead with rent / mortgages, insurance, taxes and utilities still due.

Don’t see your Representative on the list above? Contact them and urge them to support SOS and save indie venues from finally closing.

By submitting this form, you are granting The Hopewell Theater permission to email you. You may unsubscribe via the link found at the bottom of every email.